Released through a Rainbow

Sharing this beautiful story from the British Isles

December 8 at 8:45am ·
Last month something truly beautiful happened at a funeral we attended with four of our doves.
It was a small group of just four people (hence the four doves) and the funeral director had explained to us that the daughter, only child of the deceased, was very distressed at the thought of letting go of her mother and had found organizing the burial very difficult. He wanted to make sure everything went very smoothly for her and thought a dove release may help her to settle with her mother’s onward journey.
The day arrived, sunny and crisp, a beautiful autumn day. At the Natural Burial Ground, surrounded by woodland and gorgeous views of the South Downs, we set up our flower-decked basket and waited patiently graveside for the chapel service to complete. Finally, we saw the doors open and at the very point a beautiful willow casket was carried gently outside, the heavens opened. The grass-covered footpath leading to the grave was no more than 50 yards but by the time bearers and family arrived everyone was soaked to the skin, drenched by icy rain and hailstones! As the coffin was lowered and the minister said the final blessing, droplets of water dripped from his nose and his carefully written notes were turned into a sodden, ink-splattered mess. Then as suddenly as it had started the deluge stopped and our sorry little gathering was instantly bathed in bright sunlight. Relieved, we carefully explained the process of the release and handed out our much-loved birds, feeling the mood change as we did so. As the final family member gently cradled his dove and we turned to move away, a gasp went up: there close to our right the most magnificent rainbow draped the trees.

The family said their goodbyes and raised their arms and the doves flew, up and away – all four of them directly toward the rainbow. At that point I think everyone’s eye’s became as wet as the rest of their bodies – it was perfect.

For the family, tears flowed amidst awestruck smiles and the message was silently received. ‘Mum’ had said her beautiful goodbye, all was well, she would watch over them forever.
For us the message was a reminder that the most memorable and freeing gifts often come after great heartache. As we keep focused and do what has to be done, blessings will arrive quite unexpectedly.

NB: while we guarantee our doves will make your event magical and memorable, we can’t promise the rainbow will turn up on cue! 😉

Viv Lambert is the owner of Lambert’s Dove Release and has given permission for sharing her story. 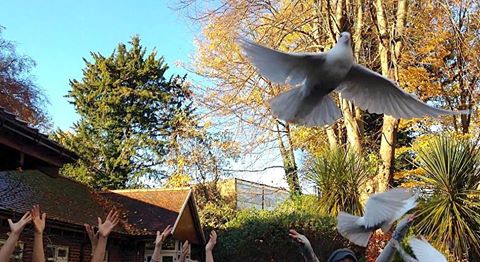