What a contrast of musical culture at the 2017 Lights on the Hill Trucking Memorial held at Gatton.

Leading with country singers, followed by not sure if it was Maori/Samoan native tongue singing of ‘How Great Thou Art’, then out on the lawn the Hake, after the wreath laying Bagpipers and concluding with 20 or more prime mover truck horns. What a blast!

A brightly dressed country lady was heard to say, “there was a lot of love there today”. As the crowds withdrew from the Memorial at its conclusion. 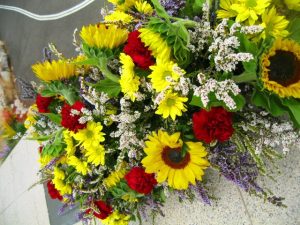 So many people full of character are a part of this emotionally moving event. One of the three people who were holding the doves for release after the wreath laying, noticed the bird was frightened by the photographer’s clicking camera, the dove releaser held it close to his heart, and spoke reassuring to it saying, “you have a safe journey home”, the bird responding to the warmth in the tone of his voice and peaceful presence, looked up at him engaging with him at that moment. Afterward the trainer upon hearing this, confirmed the story, by testifying that when the birds are being photographed the trainer will talk to them so that they are looking at the camera.

The crowds were so packed in this year that the pipers were prevented from marching in front of the truck line-up. Piper Brian May an Irish born character, wears the Order of Saint Patrick badge on his hat and claims to have the talent of playing the Irish marching pipes, which uses the elbow windbag (apologies for incorrect terminology).

Piper Joe McGhee a Scottish born piper wears his family crest badge on his hat, written in Latin is ‘with a strong hand we serve’, pictured is a fist holding a dagger. Joes silk flag displays the ‘Aussie-Scot’, the sky blue and white cross fills the map of Australia. When exchanging business cards, with surprise at the remarkable photograph on the card, Joe reveals that following him is the last of the F1-11’s when they were decommissioned.

Walking through the receding crowd as I carry my gear back to the car, I approach a lady giving her review of the birds’ performance, “they circled twice and then flew in that direction”, I smiled and replied, “yeah, that direction is towards home”. Happy that the birds were confident and successful with their job, I too headed for home.